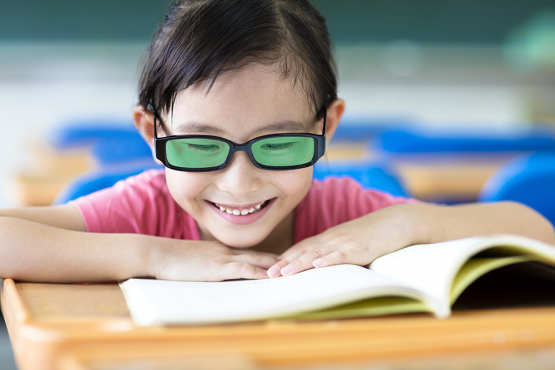 Many people have trouble with reading. For some, this is due to a learning disorder such as ADHD or Dyslexia. For others, it may be an issue with slow processing speed that causes them to take more time to comprehend written words and directions. And some never find out what the cause is at all. One of these less-diagnosed causes is Irlen Syndrome.

What Is Irlen Syndrome?

Estimated to affect as much as 14% of the population, Irlen Syndrome is a perceptual processing disorder. It affects how the brain processes visual information. Often, text is seen as slightly blurry or with a “halo” effect at the edges. People with Irlen Syndrome tend to have light sensitivity, reading problems, concentration problems, and difficulties with writing as a result. Frequent headaches, especially during reading, is a common sign of Irlen Syndrome and tends to be accompanied by tiredness and skipping words or lines when reading.

Poor depth perception is another symptom which can result in difficulties with ball sports, stairs, driving, and even social problems such as judging proper personal space distance. Another common consequence of Irlen Syndrome is loss of self-esteem, as people with undiagnosed Irlen Syndrome compare themselves to “successful” readers and come to believe that they are “dumb”.

Many people are unaware of Irlen Syndrome, and live their entire lives not knowing that they have it. This means that they never get to use any kind of aids or remedies to ameliorate their symptoms and become good readers.

Researchers discovered another interesting correlation when delving into Irlen Syndrome. As stated above, approximately 14% of the general population may have Irlen Syndrome. That number jumps up significantly for people with a learning or reading difficulty. Nearly half of people in this category also have Irlen Syndrome, along with about 1/3 of people on the autism spectrum and 1/3 of those with a concentration or attention problem such as ADHD.

How does one discover if they have Irlen Syndrome?

If someone has several symptoms of Irlen Syndrome, there are several self-tests available. Irlen.com has both a short and a long self-test that give immediate answers about if a professional evaluation is recommended or not. There are official screening centres in New Zealand (On Track Learning is one) that can run more comprehensive tests and then refer to an Irlen Diagnostician if required.

How is Irlen Syndrome Treated?

Currently, Irlen Syndrome is not curable, but there are ways to mitigate the visual processing issues.

Irlen Screeners can provide specific coloured overlays for people to lay on the text that they are reading to alleviate symptoms.

Irlen Diagnosticians ascertain the exact tint necessary to put into Irlen spectral filters that are worn as glasses. These special filters help with everyday issues such as light sensitivity, glare, depth perception, night driving, or copying from a board.

The overlays that an Irlen Screener can offer to put on text are often a different colour to the Diagnostician’s recommended Irlen tinted spectral filters that the eyes see through.

The Irlen Method involves using coloured overlays or tinted filters in glasses in order to filter out specific wavelengths of light. This filtering helps correct the processing problems and can greatly improve some symptoms.

Irlen Syndrome is not an optometric problem, which is why the glasses are referred to as filters rather than lenses. However, some people do have tinted lenses that resolve both optometric and perceptual problems.

What if you suspect someone you know has Irlen Syndrome?

If you or someone you know has difficulties with reading, especially if they don’t otherwise have a learning or attention disorder, Irlen Syndrome may be the cause. Many students are able to significantly increase their abilities and scores in school through the use of the Irlen Method. There are many testimonials and success stories from students who were able to study and learn more effectively, and taking a test can confirm or rule out Irlen Syndrome as a possibility.

See us at On Track Learning if you think that an Irlen Screening may be useful for you.